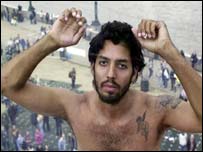 The illusionist, who spent 44 days in a glass box for a starvation stunt in London in 2003, will use lines giving nutrition and air to stay alive.
...

Organisers say they want fans and well-wishers "to visit, touch the sphere and offer words of support".

Blaine's London stunt, in which he was suspended in a glass box by the river Thames, saw him heckled by crowds. His box was also hit by missiles including golf balls and eggs.

Blaine's spokesman Pat Smith said the magician did not expect to receive similar attacks in the star's "home town". He said: "Anytime he's done anything in New York, the reaction has been overwhelmingly positive. New Yorkers are cool about this kind of thing."

Au contraire, Mr Smith. Londoners are cool about this sort of thing.

That my countrymen refused to take this pompous, self-publicising buffoon and his pointless martyr-complex remotely seriously is testament to the fact that Britain is still, just about, the finest nation on the planet.
Posted by Brit at 4/25/2006 6 comments

...And if you follow Brunel’s Great Western Railway from London Paddington to Bristol, you’ll pass along the way the massive chimneys of Didcot Power Station.

Everyone claims to hate these steaming giants, but I think they’re extremely beautiful, especially as you cruise sleepily past them in your train carriage. Your natural wonders are all well and good, but for my money man’s ingenuity is really the thing. 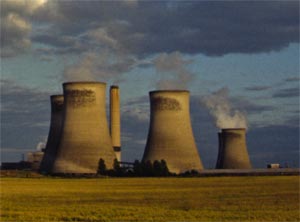 The weekend saw celebrations in Bristol for the 200th anniversary of the birth of engineering genius Isembard Kingdom Brunel.

Which is as good an excuse as any for a picture of his most beautiful creation and this great city’s iconic feature: the Clifton Suspension Bridge, which spans the Avon Gorge. 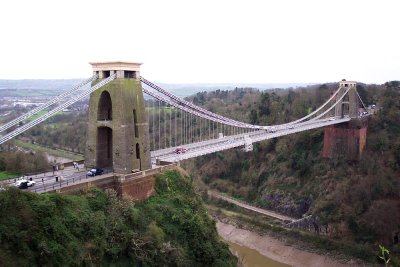 Think of England is off on a big family jaunt to Bruges until after Easter. Enjoy the holidays, dear readers, commenters, friends and foes.
Posted by Brit at 4/11/2006 0 comments


Let us start with President Bush's speech to the United Nations on Sept. 12, 2002, which I recommend that you read. Contrary to innumerable sneers, he did not speak only about WMD and terrorism, important though those considerations were. He presented an argument for regime change and democracy in Iraq and said, in effect, that the international community had tolerated Saddam's deadly system for far too long. Who could disagree with that?

Here's what should have happened. The other member states of the United Nations should have said: Mr. President, in principle you are correct. The list of flouted U.N. resolutions is disgracefully long. Law has been broken, genocide has been committed, other member-states have been invaded, and our own weapons inspectors insulted and coerced and cheated. Let us all collectively decide how to move long-suffering Iraq into the post-Saddam era. We shall need to consider how much to set aside to rebuild the Iraqi economy, how to sponsor free elections, how to recuperate the devastated areas of the marshes and Kurdistan, how to try the war criminals, and how many multinational forces to ready for this task. In the meantime—this is of special importance—all governments will make it unmistakably plain to Saddam Hussein that he can count on nobody to save him. All Iraqi diplomats outside the country, and all officers and officials within it, will receive the single message that it is time for them to switch sides or face the consequences. Then, when we are ready, we shall issue a unanimous ultimatum backed by the threat of overwhelming force. We call on all democratic forces in all countries to prepare to lend a hand to the Iraqi people and assist them in recovering from more than three decades of fascism and war.

Not a huge amount to ask, when you think about it. But what did the president get instead? The threat of unilateral veto from Paris, Moscow, and Beijing. Private assurances to Saddam Hussein from members of the U.N. Security Council. Pharisaic fatuities from the United Nations' secretary-general, who had never had a single problem wheeling and dealing with Baghdad. The refusal to reappoint Rolf Ekeus—the only serious man in the U.N. inspectorate—to the job of invigilation. A tirade of opprobrium, accusing Bush of everything from an oil grab to a vendetta on behalf of his father to a secret subordination to a Jewish cabal. Platforms set up in major cities so that crowds could be harangued by hardened supporters of Milosevic and Saddam, some of them paid out of the oil-for-food bordello.

The most recent celebrity I’ve seen throw his dunce’s cap into the ring is Brian Eno, on last night’s Culture Show, who claimed, with all the usual supreme confidence of the person famous for deeds utterly unrelated to international politics, that the Iraq invasion was “completely immoral”. Apparently he’s been one of the big (but presumably pleasantly ambient) noises in the Stop the War jamboree for a while.

Pop stars, film actors and other celebrities are generally leftist because most of them are, in essence, overgrown teenagers. Teenagers naturally want to rebel against the status quo and accepted wisdom, and that’s only right.

But just as it takes a wilful mental perversion for an adult to continue to insist that capitalism is evil, despite the fact that no other system has ever resulted in anything other than comparative misery and oppression, so it takes a wilful sort of blindness to believe that the democratic, liberal, free countries of this world are always in the wrong, or always motivated by greed or imperialism, even to the point of retrospectively pardoning a malignant cyst on the planet like Saddam.
Posted by Brit at 4/07/2006 15 comments

If Bush and Blair...

...got caught together in that matter transporter from The Fly, the resultant hybrid would probably look just like Lord Browne, chief executive of BP.

Brit
Editor of The Dabbler - www.thedabbler.co.uk

His skill: to find the perfect snippet,
To metaphorically paperclip it
To another view or bent,
Find the balance of the argument,
Then, with his pithy comment,
tip it.

From The Blogger's Lament