We’re having a lot of weather at the moment.

So much, in fact, that I have drawn on the board in my office an Expanded Venn Diagram showing the Holy Trinity of the British winter – Rain, Hail and Snow – and their various intermediary stages.

A magnetic marker indicates where we currently stand, leading to much debate amongst my colleagues, all of whom believe themselves to be the most finely tuned to the ways of the English weather. 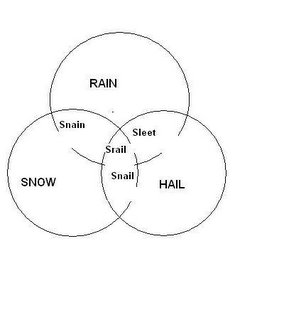 For the record, the consensus for the Bristol climate at the time of posting is “Snain”.
Posted by Brit at 2/23/2006 2 comments

Talking of frolic and whimsy….

And now for something completely different.

Although the whole cast could sing pleasantly enough with a minimum of bum notes, the production was most notable for the incongruous presence of what must surely have been an ex-pro opera singer in the role of leading lady Mabel. She was a proper, glass-shattering, scrotumtightening soprano, and although you could tell she was trying to rein it in a bit in the duets, she positively overwhelmed the rest of the cast. I’ll bet they loathed her in the green room.

But what G&S really reminds you is that language can be irresistibly funny even without any jokes just by having unexpected rhymes (especially WS Gilbert’s swanky ‘internal rhymes’) and a bouncy rhythm.

For example, the maidens, about to be forcibly married to the pirates, observe:


We have missed our opportunity
Of escaping with impunity;
So farewell to the felicity
Of our maiden domesticity!
We shall quickly be parsonified,
Conjugally matrimonified,
By a doctor of divinity,
Who is located in this vicinity.


There’s something about that “Who is located in this vicinity” that just cracks me up every time.

Then as for Leith Fort, it was erected in 1779, which is really grand,
And which is now the artillery headquarters in Bonnie Scotland;
And as for the Docks, they are magnificent to see,
They comprise five docks, two piers, 1,141 yards long respectively.

Humour should never be analysed too much, just enjoyed, but it’s to do with juxtaposition. Mundane facts or grim sentiments expressed in light verse are amusing because the rhythm and rhyme mean that your ear is expecting something twee or sprightly, and the surprise is funny.

I came across a striking example (via David Baddiel’s book column in the Times), in the form of a ‘serious limerick’ by film critic Peter Bradshaw:

An Hiroshima victim called Raoul
Went stumbling around in a cowl
In this grim garb encased
He viewed carnage and waste
And felt misery and pain in his soul.
Posted by Brit at 2/17/2006 5 comments

The harmony of civilisations

There had been fears the rally may have been disrupted by extremists, but it proved to be a trouble-free afternoon.

The event aimed to explain the views of moderate Muslims towards cartoons published in a Danish newspaper which led to worldwide protests.

Organisers also said it wanted to dissociate the mainstream Muslim community from a "minority of extremists".

Earlier, organiser Anas Altikriti, of the Muslim Association of Britain, said he was confident the demonstration would not be taken over by extremists, adding that only the official slogan - United against incitement and united against Islamophobia - would appear on their T-shirts and placards.

Doctor Azam Tamimi, who is the director of the Institute of Islamic Political Thought, said before the rally he believed it would be peaceful.

"The main purpose of the rally today is to object to what has been going on in a civilised manner.

"We have the right to be angry, but we have to do it within the remits of the law, and we have to respect the rights of others," he said.

This was a peaceful British protest by peaceful Britons who happen to be Muslim, and was of immeasurable importance.

The people who want to instigate a clash between Muslims and non-Muslims in Europe are the likes of Nick Griffin of the BNP, and Osama bin Laden.

Both of these extremists wish to portray Islam and Western values as being fundamentally opposed. It is vital that the moderate majority continues to actively demonstrate that they are wrong.

It is also incumbent on mainstream media to put the views of the extremists in their proper perspective – a small band of evil people whose actions not only threaten the general public through their own acts of violence, but by turning public opinion against a minority group, could take us down the same road that the Germans followed in the 1930s.

A plague on all houses concerned

Foreign Secretary Jack Straw has condemned the decision by some European newspapers to reproduce cartoons of the Prophet Muhammad as "disrespectful".

But he praised the UK media for its "considerable responsibility and sensitivity" for not publishing them.

He said freedom of speech did not mean an "open season" on religious taboos.
British Muslims are preparing to protest outside the Danish embassy in London, after the cartoons first appeared in a Danish newspaper.

What a strange world we live in. Strange enough for British papers to be called "responsible" and "sensitive", but things are stranger than that...

If Tony Blair had hung around to cast what would have been a deciding vote on the Religious Hatred Bill, it would now be illegal to print these cartoons in Britain.

Thankfully he didn’t, and the latest piece of ignorant New Labour nannying has been avoided. It is and should be perfectly legal in Britain to take the piss out of any religion, whether it is vicars on stage or cartoons in newspapers. Taking the piss is what being British is all about. No religious person has the right to demand that everyone else take his beliefs as seriously as he does.

But Straw is also right. That fact doesn’t mean that you are morally blameless if you publish any old tat that’s guaranteed to offend large numbers of people.

The cartoons in question can be found here.

A simple perusal will show you that as supposed satire they are unfunny, unsubtle and unfair. They crudely and ignorantly suggest that all Muslims are bombers.

In fact, it is only the halfwit fundamentalist element that bomb, and true to form, the halfwits are on the streets bellowing fury at all cartoonists Dutch, issuing fatwahs and generally engaging in all the other nonsense that gives religion a bad name.

That this would happen was entirely predictable. The French newspaper editors that re-published them en masse must have known it would happen. They did it not because of some pointless gesture about free speech – they already have free speech – but because they are provocative idiots.

The cartoons should have been ditched on grounds of quality alone. They’re embarrassing, and wise Muslims will ignore them.

But of course, the cartoons themselves couldn’t cause a fuss unless there were people on both sides looking for something to make a fuss about.

What causes the spark is usually neither here nor there, if the civilisations are desperate enough to clash.
Posted by Brit at 2/03/2006 26 comments

A Prince with his finger on the mutton

Meanwhile, Prince Charles once again shows that he's got his finger firmly on the pulse of modern Britain.


A revival of mutton could give a boost to under-pressure sheep farmers and help sustain traditional countryside life, Prince Charles has said.

The Prince of Wales was speaking at the Ritz hotel in London at a dinner to launch the Mutton Renaissance Club.

...The prince said he had "fond childhood memories" of the meat and it was a "tragedy" that it had fallen out of favour over the years.
Posted by Brit at 2/03/2006 0 comments

So it turns out Google is evil after all. Like a toddler who's just caught Santa beating up his little helper round the back of the grotto, the geek community reacted as one when Google entered the Chinese market with its censored google.cn service last Wednesday. Anger and disbelief quickly gave way to a sense of abandonment and fear, and as Daddy sat us down for a grown-up talk about publicly-owned companies, market economies and shareholder rights, we felt our tiny little world dissolve into a new, scarier reality. Now we've all had our little cry, what next?

It's time to start asking a few grown-up questions. Such as why were we naive enough to trust a company with such a pithy motto in the first place?

Perhaps I'm being naive about this myself, but I don't see that Google's move is necessarily a disaster for freedom.

It might be that we look back on it as the day that Google yielded to censorship and the Big Brother state, but equally we might look back on it as an early step on the road to opening up the world to the Chinese public. The foot is in the door.
Posted by Brit at 2/03/2006 1 comments

Brit
Editor of The Dabbler - www.thedabbler.co.uk

His skill: to find the perfect snippet,
To metaphorically paperclip it
To another view or bent,
Find the balance of the argument,
Then, with his pithy comment,
tip it.

From The Blogger's Lament